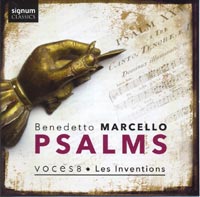 Description: Marcello set the first 50 of the Psalms of David which were published between 1724 and 1726 and which proved so popular that they were soon translated many of the European languages and remained, in the opinion of his contemporaries, one of his most important works of all. But it took until 1757 for Avison to do them into English. Minor musical adjustments were necessary to fit the prosody of the English translations but the pieces are predominantly unaltered. Texts included. Voces8, Les Inventions; Barnaby Smith & Patrick Ayrton.