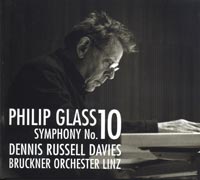 Description: The 10th Symphony started life in 2008 as the last piece Glass has written for the Philip Glass Ensemble. Realising that as a thirty-five minute occasional piece for very specific forces its performance prospects were limited, the composer set about reworking it in orchestral form, and added the result to his canon of symphonies. Perhaps because of its origins, the piece feels rather like a nostalgic throwback to the 1980s; the chord patterns are very reminiscent of music from the operas of that decade; Satyagraha, Akhnaten, Planet 8 - the main difference being that they now occur over a much more compressed timespan, with far less immediate repetition of motifs. Percussion is important in this piece, all five movements feature percussive emphases of their incisive rhythms and syncopated instabilities propelling them forward. Concert Overture (2012) was commissioned for the bicentennial of the war of 1812, and consists of Glass riffing on Tchaikovsky's overture in his own language, with the solemn introduction, heavy brass fanfares, military tattoo and cascading bells (though, regrettably, no 'cannon and mortar effects'). Bruckner Orchestra Linz; Dennis Russell Davies.