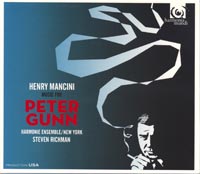 Description: No, it's not a classical music-based score like the film scores we sometimes offer, but Mancini's score for the 1958-61 TV series is one of the most well-known and beloved cultural objects of a couple of generations of Americans and unleashed a mini-flood of imitators in both TV and the big screen. This recording of 15 tracks uses the original orchestrations (alto flutes, alto, tenor and baritone saxes, trumpets, horns, trombones, guitar, vibraphone, piano, bass and drums) and is approached as living, breathing music, not an attempt to duplicate the original soundtrack (which is probably still available on CD if you really want it). Harmonie Ensemble/New York; Steven Richman.