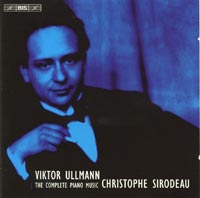 Description: There has been a gratifying resurgence of interest in Ullmann in recent years, and this set is certainly the best way to immerse oneself in his fine body of piano music. Ullmann was, or should have been, a major figure in the generation of composers that followed Mahler - Zemlinsky, Schmidt, Schulhoff et al. - and his piano sonatas bear eloquent witness to this. Mahler is a clear influence, in the use of folk melodies, trenchant irony and tonality pushed close to the breaking point. The last three sonatas were written in Theresienstadt, before the composer's murder in Auschwitz, and at least two were intended as sketches for never to be written symphonies. In fact, many passages from the earlier sonatas also seem to cry out for orchestration, from the tragic funeral march (in memory of Mahler) of the First, to the clever, progressive set of variations in the Third; the works all have that kind of bold, dramatic sweep and exquisite variety of texture and tone-color. Significantly enhancing the desirability of the set is the inclusion of the world premiere of the Schoenberg Variations, an early work, but already wholly characteristic of the composer. Based on the tiny, enigmatic fourth of Schoenberg's Op. 19 Klavierstücke, Ullmann's variations begin by reflecting the spare atonality of the original, but accumulate richness of chromatic harmony and emotional expressiveness as they proceed into a richly evocative, ambiguously twilight world with shades of Busoni or late Mahler. A grittily determined, largely atonal double fugue with an unexpectedly tonal ending rounds out the work. 2 CDs. Christophe Sirodeau (piano).