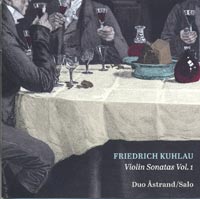 Description: The op. 64 sonata was originally written for the flute (1825) but was also published in Eliason's 1855 arrangement and works equally well as a full-scale Romantic violin sonata of 25 minutes. The three Op. 79 sonatas in length and proportion call to mind Schubert's Op. 137 so-called Sonatinas. Written around 1827, they are 13-16 minutes each in length but are not Sonatinas! Christina Åstrand (violin), Per Salo (piano).