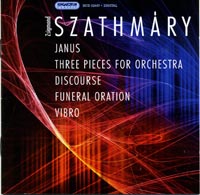 Description: A composer with a taste for juxtaposing the ancient with the very modern (as tends to be the way in such cases, the end result comes out sounding predominantly like the latter), Szathmary recorded his Janus on two organs in separate locations, the one a 17th-century Swiss instrument, the other the very modern organ of the Kunst-Station Sankt Peter, Cologne, which among other innovations has what would be on a piano a sostenuto pedal and variable wind pressure, as well as (acoustical) percussion stops. The result has dense clusters, chords in different temperaments (with microtonal results) and a fluid density of texture reminiscent of certain works of Ligeti, Volumina and Atmospheres for instance. Although dedicated to Ligeti, the orchestral Pieces have less in common with this aspect of his music, thought their rhythmic liveliness, even playfulness, and diversity is a common factor. The archaic element in the Funeral Oration is the 12th-century text; the music, especially the orchestral component, takes up where Bartók left off and tends towards Penderecki in emphatically expressive dramatic content. Vibro again exploits the technological innovations of the St Peter's organ, utilizing its MIDI capabilities to play some passages (by analogy to a player piano) as a 'player organ'. Hungarian-English texts.