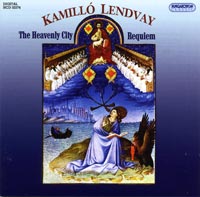 Description: The German-language Heavenly City sets texts from the Book of Revelations in a sumptuous and harmonically rich idiom, with some suggestion of modality that provides a link to Bartók, the overall vocabulary tonally based, with a minimum of vocal special effects. The eloquent, melismatic solo bass line is matched by an important solo cello part. The Requiem rises out of wandering, ambiguous chromatic depths with distinct shades of Bartók as the tension rises. The Kyrie is a short, extrovert movement of prayer in tonally based counterpoint. These first two sections act as a prelude to the bulk of the piece, the much larger Dies irae, dramatic and troubled, and lacking the resolving movements that traditionally follow, suggesting an uneasy response to the unresolved problems of our times. German-English texts.