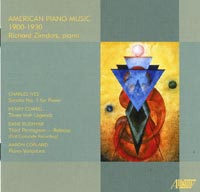 Description: Cowell and Rudhyar advanced a concept of the spiritually transcendental powers of dissonance, which were also put into print by the latter. Anyone interested in the circle of composers influenced by Scriabin, astrology and various types of mysticism will want to have the Pentagram (1926-28), a, five-movement work in which the sonorities of the piano are as important as the work's darkly luminous harmonic colors. We've already offered other recordings of Cowell's Legends (1917-22), famous for their tone clusters. Richard Zimdars (piano).