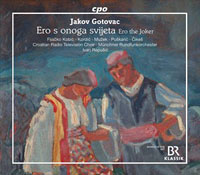 Description: We have no audio files or booklet notes for this all-time favorite opera in Croatia so we give you abridged sales notes: “The Croatian Jakov Gotovac, one of the most trailblazing composers of the earlier Yugoslavia, premiered the opera in 1935. After its immediate success it toured through what was then the Kingdom of Serbs, Croats, and Slovenes, and today it continues to be a favorite selection for performance programs in the countries of the former Yugoslavia. Gotovac’s music sparkles with Eastern European and Mediterranean folkloric influences. The composer is regarded as one of the founders of a Croatian national musical language that in the nineteenth century was fueled by the yearning for national identity. Here we hear music full of lyrical and witty moments and with magnificent arias and choral numbers.” This is a live recording from May of last year. We have no information on the libretto or translations if any but, this being cpo, I’m betting on a full Croatian-English or Croatian-German libretto. 2 CDs. Valentina Fijačko Kobić (soprano), Jelena Kordić (mezzo), Tomislav Mužek (tenor), Ljubomir Puškarić (baritone), Croatian Radio Television Choir, Munich Radio Orchestra; Ivan Repušić.