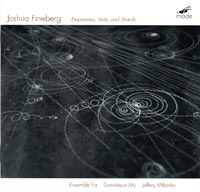 Description: Fineberg's works aim to tap into fundamental archetypes of psychoacoustic experience, despite being based on principles that are far from the most widely accepted means to that end, tonality. Using computer-based harmonic analysis (and in some cases, computer-generated sounds), he designs music for the way our brains are built to listen. Empreintes is built on the interaction of live instrumental sounds and a computer that responds to them; complex as it is, it achieves a strange feeling of meditative consonance, and of cogent dialogue in the work's more kinetic sections. 'Veils' and 'Shards' - with no electronic component - investigate the results of representing a lengthy and complex ritual (a Tibetan Buddhist ceremony) or an entire society (mysterious ancient Egyptian cultures) through in the one case analysis and reinterpretation on the p[iano of a recording of the rite; in the other, representations of fragments of pottery in musical forms, and their 'reconstruction' into speculative larger forms with meaning. 'The Texture of Time' blends flute sounds with electronic processing in real time, rather than differentiating them in space and time as in much electroacoustic music. 'Broken Symmetries' - the title, a term in particle physics which refers to the crystallization of undifferentiated matter into atoms, also evoked in Colin Matthews' similarly titled work for large orchestra - is a piece about energy, and the coalescence of musical fragments into complex compounds (or their dispersion into a whirling mass of musical complexity in the central section of the piece). Ensemble Fa; Dominique My (piano).