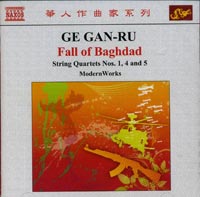 Description: In his own words, Ge "often tries to combine contemporary Western compositional techniques with ... Chinese musical characteristics", and that sums up the overall vocabulary presented in these quartets. The first uses a variety of extended playing techniques - not especially extreme by the standards of the Western avant-garde, admittedly-to expand the palette of the quartet. The fourth is more conventional, with passages that even strongly suggest tonal references to late-romantic (early Schoenberg) harmony, and extended passages of rhythmic stability. The fifth explicitly references Crumb's Vietnam-era Black Angels, and is similarly full of screaming, distorted sounds of pain, glissandi, extended techniques and percussive effects. Microtonally inflected lamenting melodies suggest both middle-eastern and far-eastern music. It isn't quite clear which fall of Baghdad is referred to by the title - the composer's comments ad the Crumb reference suggest the most recent one, at least in part - but the work's aim, as a vigorous anti-war protest, is very clear from the vivid, uncompromising musical material. ModernWorks.