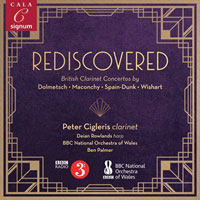 Description: Four ‘rediscovered’ clarinet concertante works of the first half of the 20th Century. Composed between 1930 and 1947, the works span a time of change in the musical landscape of Great Britain; pre-1939/40 the two predominant styles within British music were those of Post-Romanticism and Nationalism (Spain-Dunk’s is from 1930 and Dolmetsch’s from 1939), whereas post-1945, with the influence of the BBC, Modernism became the dominant style (but Maconchy and a Wishart from 1945 and 1947 respectively remain quite approachable). It also happens that two prominent British clarinettists tie these four works together; Fredrick Thurston and Reginald Kell were both involved in performances of the works at various points during their careers. Peter Cigleris (clarinet), Deian Rowlands (harp), BBC National Orchestra of Wales; Ben Palmer.