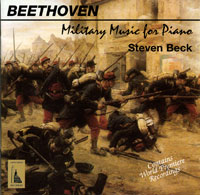 Description: One of the most enjoyable of this series due to its 1827 Jakesch fortepiano from Vienna, whose Janissary stop is employed to great effect in Wellington's Victory, a work which sounds as good on this instrument as it does with orchestra! Half of these pieces, including Wellington are first recordings in their piano versions. Steven Beck (fortepiano).