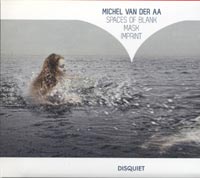 Description: Very post-something-or-other. Van der Aa constructs a new kind of romanticism out of a curiously detached observation of the techniques of modernity and a film-maker's eye for drama. The composer is indeed noted for his stage and film work (not just the musical components thereof), and these narratives of isolated individuals observing their existence have a powerful dramatic element. Spaces is a three-movement orchestral song cycle, setting evocative texts by Emily Dickinson, Anne Carson and Rozalie Hirs in soaring vocal lines devoid of extended technique eccentricities, with an orchestral component that combines lush romanticism, a good deal of tonality and a bracing dynamism in its energetic passages. Beautiful sonorities are extended through the subtle integration of a tape part. Mask also employs electronics, and a greater theatrical element, with the percussionist 'masking' a ticking metronome with lengths of sticky tape deliberately, and very audibly, peeled from a desk during the performance. Layers of sound within the ensemble also 'mask' each other, leading to a series of unpredictable, complex heterophonic textures. In Imprint the solo violin is the protagonist, and the mechanism in which it is trapped consists of the performance conventions and instrumentation of the Baroque, distorted as though their meaning has been half-forgotten. Texts included.