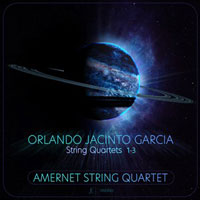 Description: The first quartet dates from the mid-1980s, following the composer’s studies with Feldman. Its slow pace and extremely economical material are clearly influenced by the older composer, but even at this stage García seems unable to resist more intricate and active textures woven from small repeated fragments than his mentor typically used. A lengthy introduction in sustained harmonics and long-held single pitches is followed by the piece’s main section, resembling a kind of rarefied, static minimalism. The material is sufficiently spare never to suggest an harmonic basis, but similarly it never really sounds atonal or dissonant, those concerns being entirely beside the point of what the composer is trying to achieve. The work concludes with another slow, sustained section, richer and fuller of texture than the opening. The second quartet - "Cuatro" (i.e. "four") is a fully mature work, less suggestive of the composer attempting to integrate the preoccupations of a powerful formative influence into his own developing idiom, similar to the orchestral works previously offered (05T073). Rich, chordal textures with a deliberate sense of harmony make this, in a sense, more conventional quartet writing, although the over-riding preoccupation with the suspension, or distortion, of time remains paramount. Extrovert sections in strummed textures evoke a second meaning of the title, a Cuban guitar-like instrument with sympathetic strings. "I never saw another butterfly" (String Quartet No.3) of 2018 refers to a book of art and poetry produced by children interned in the Theresienstadt ghetto, which the composer encountered in the 1990s. It places the techniques developed by García over the previous decades at the service of a profoundly moving extramusical "programme", relating it to his "Auschwitz" (10Q083) of 1994, similarly a work of great emotional intensity. The slow, overlapping chords - sometimes enriched by wordless singing from the players - here sound as a lament, and driven, post-minimalistic ostinato sections, as a protest. Amernet String Quartet.