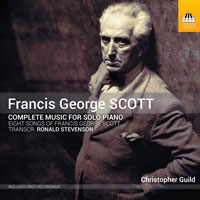 Description: Among the few who know his music, Scott, a son of the Scottish Borders, is admired for having written some of the best art-songs by any British composer. In this first recording of any of his piano music, a handful of lyrical early pieces contrast with the 58 Bartókian miniatures that constitute Scott’s Intuitions – brief but atmospheric distillations of Scottish song, dance and landscape – and a set of virtuoso transcriptions of eight Scott songs by Ronald Stevenson, the major Scottish pianist-composer of the past century. Christopher Guild (piano).