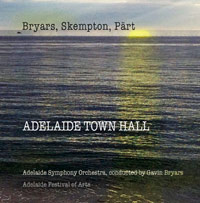 Description: Bryars gets the lion's share of this disc, taken from a concert he conducted as part of the 2015 Adelaide International Festival. Ennelina's aria from his opera about Gutenberg, the inventor of printing, stands out for its melodic beauty - this aria was singled out as a particular high point of the opera by critics at the time of its premiere. Like the epilogue, in which the shade of Gutenberg reflects on the history and legacy of his invention, the music is predominantly slow, prevailingly consonant and dark-hued and melancholy in tone. The same is largely true of The Porazzi Fragment, based on an enigmatic piano theme composed late in life by Wagner. The material is elegiac in mood, and Bryars' piece is, appropriately, an elegy, not a little Wagnerian and with deliberate reference to Strauss' Metamorphosen for similar forces. Here and in the arias, Bryars also seems to draw inspiration from certain textures and gestures from Verklärte Nacht. Wagner is also invoked in Skempton's piece - classic Skempton; very simple, just a chord sequence in varied orchestration with a certain stately grandeur, written to stand alongside the Parsifal prelude. The real surprise here is Pärt's piece, written immediately before the slow, meditative works that first brought him to the attention of a wide public. The first half is active, rhythmic and humorous, using the BACH motif on tremolo strings to produce a persistent buzzing texture; the second part, closer to the kind of thing we're used to from Pärt, sounds rather like lines from a Bach slow movement extracted from the full texture and played at half speed. Anna Fraser (soprano), Alex Knight (baritone), Adelaide Symphomy Orchestra; Gavin Bryars.