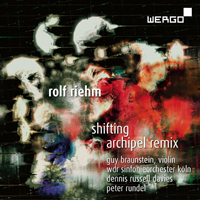 Description: Archipel Remix consists of eighteen sections that form a musical 'archipelago', islands linked by their geological substrate but diverse in landscape, flora and fauna. The concept of 'remixing' - a modern phenomenon associated with the electronic restructuring of existing material - is also at play here, in the form of transcription, distortion or the borrowing of gestures from other music to use as material in a new context. Thus fragments of a Chopin polonaise, Rachmaninov, Froberger, a 14th century French ballad, are appropriated, looped and used alongside Riehm's own material to provide driving mechanisms to propel the music forward. The music abounds in powerful imagery, and one is at risk of falling over oneself in the plethora of descriptive metaphors that come to mind. A recurring feature is the underpinning of surface material by dense chordal strata - this lends itself to the island simile, as do the chordal monoliths, reminiscent of Messiaen's Easter Island statues, that tower over a number of the movements. The idea of a labyrinth, or an Odyssey full of unexpected scenes and perils, is repeatedly suggested, as are vast, circling mechanisms, carousels or orreries on a more-than-human scale. The electronics are used somewhat sparingly, though tellingly, as when they disconcertingly detach themselves from the orchestral texture and jarringly finish a phrase unaided, or equally disconcertingly become an integral, though distinct, part of the orchestra. The idea of passage through a varied landscape full of monoliths borrowed from the language of Romanticism also applies to the 23-minute single-span violin concerto, described by the composer as 'a huge, sweeping melody. For me, it is like a river that continually gains new strength from the downhill slope of its landscape – the landscape here is the expressivity which gives impetus to the "melody" and drives it forward, "…moltissimo appassionato…"'. Guy Braunstein (violin), Cologne Radio Symphony Orchestra; Dennis Russell Davies, Peter Rundel (Archipel).