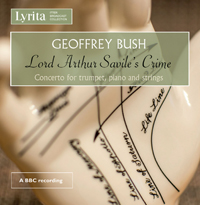 Description: Bush's one-act comic opera complements Oscar Wilde's witty, cutting, ironic satire on the morals of the upper classes in its humor and clarity of storytelling. Bush was, by his own ready admission, no experimentalist, describing his music accurately as "lyrical, rhythmic, economical, clear cut in texture and, as far as I can make it, direct of utterance". The idiom is tonal and instantly accessible, with clever musical allusions to match Wilde's witticisms, which are rendered clearly audible by the lack of grandiosity of the music's texture and the self-effacing use of recitative to highlight the text. The concerto is in the traditional three movements; a sonata form Toccata, a slightly blues-tinged Nocturne and an energetic Finale. The 1962 work betrays its origins as the composer's 1945 sonata for trumpet and piano by placing much of the argument and a good deal of bravura display material in the hands of the soloists. An engaging and attractive work of no especial depth but much elegance and ready appeal.